Home » Health & Personal Care » What Kind of Haircut To Get For Waves?

360-degree waves generally require short hairstyles for best results so if you are not sure what kind of hair cut to get for waves, here is what you need to know more about the different haircuts.

And contrary to many beliefs, your hair type is not really a major factor when trying to get 360 degrees wave hair. The major consideration is how curly your hair is. You can condition the hair to feel curly. With the right treatment in the form of hair cream, wave pomade or wave grease shampoo, durag, almost anyone can achieve waves on their hair. If you are planning on having the right hairstyle for 360-degree waves, the following information will be helpful to you.

Types of hairstyles for waves

When you cut your hair to the desired length, it will straighten out the curly area and give it an edge to form waves. Many of these wave hairstyles are a combination of taper fade, a lineup, and texture on top. Below are some of the most common hairstyles you could have for waves.

With a combination of blurry fade, a lineup, and waves, the short haircut will definitely increase your chance of getting proper waves. The beard should be properly shaped to, but to a lesser length compared to the hair. After this hair cut, you can start forming your waves with the right 360-degree wave cream. You can wash your hair with shampoo and relaxer to straighten the hair in preparation of the wavy curls. 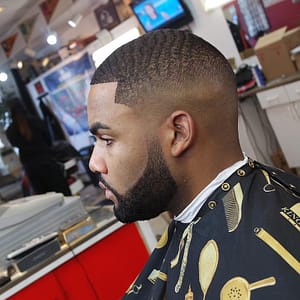 Waves and Half Moon Styling

After establishing the waves, you can add a fade or shaved part. Then incise a half moon shape to blend well with the wave pattern. This hairstyle maintains the right length balance, which makes it perfect for 360-degree waves.

Short wave hairstyles have uniform length all through. That is why they suit most people who want to maintain 360-degree waves better. The hair is slightly longer on top but the difference is not very noticeable. It may be difficult to get deep waves initially for this hairstyle. But more wolfing will produce deeper and more visible results.

Temple fade hairstyle has the waves beginning at the center of the back up to the top. The fades are visible at the sides with little straight line incisions. This is a very common wave hairstyle among sportsmen.

With this hairstyle, you only need to wear the waves on top. Of course, it will require less brushing since you are going to brush only the top of your hair. After all, not everyone can be patient enough to brush their hair on all sides continuously.

Getting 360-degree waves for coarse hair

If you have coarse hair, you can still get thick waves on them. As stated earlier, the most important thing is not the type of your hair but how it responds to your treatment.

To get 360 degrees wave, you need to keep your hair low. So, you need to have certain types of haircuts. Your hair needs to be cut to a minimum length of ½ to 1 inch. It is easier to maintain 360-degree wave on short hair, especially if you have a coarse hair. This is because the hair needs to form curls from the base so that it will be less difficult to do so as it grows. All areas of the hair should be very even too.

Once you begin the 360-degree waves, try to allow your hair to grow for some time. Give your hair at least 3 months before the next haircut.

This will give your hair more room to form better and thicker waves before then. Keep brushing daily within this period as your hair grows thicker to form deeper waves. This is what is usually known as wolfing.

After about two months, get one of the wave haircuts. You need to do this at a barbershop and with a barber who actually knows the correct haircuts for 360-degree waves. It will be easier to explain to an experienced barber than explaining what to someone who doesn’t understand. After the hair cut, the waves on your hair should become more visible.

Most wave hairstyles are relatively short. After it has reached a certain growth level, you can go to the barbershop for another hair trimming. If you brush and wolf regularly, the waves will be very visible after a few weeks when you are getting your next haircut. You may also look for some of the best wave products for coarse hair or best wave grease for straight hair to assure better and wider waves impact.

Remember that 360 waves will not form overnight. It takes some time. The first thing is to get the right haircut. Then get a good wave cream and brush the right way. The hair should be brushed according to how the waves will form. That is, vertically from the center of to the front, and downwards at the sides and back. There’s no doubt that you are going to achieve visible waves when you get the right hair cut and condition your hair properly.

Thedigmagcom is a participant in the Amazon Services LLC Associates Program, an affiliate advertising program designed to provide a means for sites to earn advertising fees by advertising and linking to Amazon.com